World-famous private guided tours of Berlin – unique travel experiences tailored to help you make the most of your time in our extraordinary city!

Private tours of Berlin starting from 70€ per hour

“In 15 years of working as a professional tour guide, I have introduced thousands of visitors to Berlin; from independent travellers, groups, companies and schools – to Holocaust survivors rediscovering the streets they once called home and the relatives of Nazi perpetrators seeking answers to the crimes within their families.

Originally from Yorkshire in the north of England, I moved to Berlin to work as a journalist before becoming a private tour guide in 2005. Specialising in Berlin’s turbulent 20th century history, I have spent years working at the former East German secret police headquarters as a historical consultant and am also a licensed guide at the Sachsenhausen Concentration Camp Memorial.

Since 2014, I have served on the board of the Berlin Guides Association as Treasurer, Vice President and now President.”

All tours conducted in accordance with current Covid-19 guidelines.

“Matt is British and loquacious, and a rich repository of German history… he is a born storyteller.“

Janine di Giovanni (Conflict Reporter & Author)Paris, France
“Matt’s tours are more like an Anthony Bourdain conversation. Think of him as your concierge in Berlin, with a PhD.”

Beatrice de Beaufort (Lycee Francais Charles de Gaulle)London, UK
“Matt can create a compelling window into the past that seems as vibrant and as real as if it were happening right in front of you.“

James Hoare (Editor – All About History)London, UK
Previous
Next

Arrange a totally free 30 minute video call to address any concerns/answer any questions you might have about booking a private tour of Berlin
and discuss any accommodation, transportation, and restaurant/event reservation ideas you have.

Finding your feet in a foreign city can be as daunting as it is thrilling. With each junction the option between something authentic and undiscovered, and, well, a wrong turn.

I’m here to share my expert knowledge of Berlin with you; the sights, the stories, and the security of knowing there’s no reason to fear you’re missing out on something better.

Get started with an in-depth Berlin Highlights tour!

The Sachsenhausen Concentration Camp In The DDR

Enter The Palace Of Tears – The Tränenpalast

This collection of tours is for anyone who wants to explore Berlin’s not-so-distant past and uncover what evidence remains of the grand – and often tragic – events that have taken place in this unique city. From Berlin’s time as the capital of Prussia and Imperial Germany, to the catastrophe of the First World War; the rise and fall of Hitler’s Third Reich; the Cold War division and occupation of Berlin, and its eventual reunification following the ‘Fall of the Wall’.

The Battle Of Berlin

Discover the key locations of the Battle of Berlin – the bloody ‘Race to the Reichstag’ that ensured the defeat of National Socialism and end of WWII in Europe.

The Capital Of Tyranny

Delve into Berlin’s darkest chapter and explore what remains of Hitler’s Berlin – a private guided tour through the heart of the capital of tyranny.

The Republic Of Fear

Explore life behind the Iron Curtain in the Workers’ and Peasants’ state of East Germany; examing the reality of utopian socialism up to the ‘Fall of the Wall’.

Explore Weimar era excess, poverty and violence in Berlin’s Golden Twenties –  how the dream of a new democratic Germany would turn into a nightmare.

The Glory Of Prussia

Visit Sachsenhausen and learn about life and death in a Nazi ‘Protective Custody Camp’; the architecture of total control; and the tyranny of forgetting. 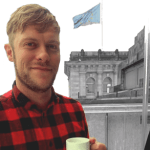 Get in touch now to book a private tour of Berlin

All it takes is one short message to get the ball rolling!