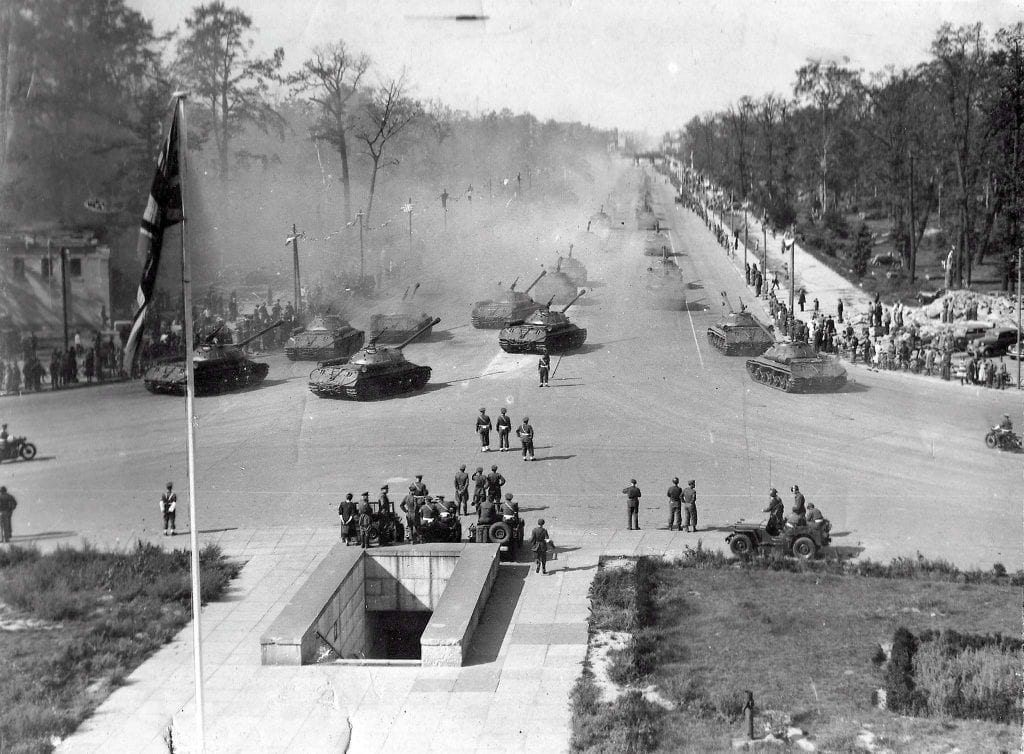 Earlier this year, we covered the anniversary of the British Victory Parade that took place on July 21st 1945 - this month we take a closer look at the Allied Victory Parade of September 1945 when the four Allied powers gathered their troops to celebrate the defeat of Nazi Germany.

It didn’t quite turn out as Joseph Stalin had expected.

In fact, the Allied Victory Parade in Berlin on September 7th, 1945 would come to be known as ‘The Forgotten Parade’ – overshadowed in size by the earlier British Victory Parade held in Berlin in July, 1945.

It was intended to be a monumental celebration of the forces that had collectively defeated Nazi Germany. The story of that defeat would, however, be presented differently by the different Allies. According to the Soviet side, the Great Patriotic War was won by the Red Army taking on, with little assistance, the might of the German forces and civilian resistance. The majority of fighting in this war, irrespective of how we choose to name it (World War Two/Second World War), undoubtedly took place in Eastern Europe. With around 25 million casualties on the Soviet side. Indeed, in the final 17-day Battle of Berlin, the Soviets sustained more than 340,000 casualties (over 80,000 died).

Germany finally surrendered to Soviet Marshal Georgy Zhukov, along with Eisenhower’s representative British Air Marshal Tedder, on May 9th 1945 in the former canteen of the German Military Engineering College at Karlshorst in Berlin. After “provisionally surrendering” to the British on May 4th and the Americans on May 8th.

The war would test the unlikely partnership between East and West, cooperating to rid Europe of German fascism, in many ways. However, it was the Soviets who reached the Nazi capital first and it was Zhukov who led his troops into Berlin, bringing the war to a close. In regard to that and his other military successes, there was probably no better man to represent the Soviets on the saluting podium on Charlottenburg Chaussee at the Allied Victory Parade that September.

His military prowess first became evident in August 1939 when his tactics out-smarted the Japanese army at the Battle of Khalkhin Gol on the Mongolian/Japanese border. From there he went on to oversee the defence of Leningrad, then to face and halt the German drive to Moscow and, according to his memoirs, played a significant part in planning for the Battle of Kursk and the subsequent advance forward into Germany.

He was the only Allied commander present at the parade, weighed down with (at least 30) medals, the other attendees wearing only their military ribbons. It was rumoured that Zhukov wore a metal plate inside his tunic to help counter-balance the weight of the medals and keep him upright throughout the ceremony.

One of the medals he wore with pride in the centre of his tunic, was the Knight Grand Cross of the Order of the Bath (GCB) awarded to him on behalf of the King of Great Britain (George VI), by Field-Marshall Bernard Montgomery on July 12th 1945 for his services towards the British Crown.

Prior to the start of the Allied Victory Parade, Marshall Zhukov was driven in front of the participating troops in an American built open-top Packard Twelve motor car.

Montgomery was Zhukov’s British equivalent as was Dwight D. Eisenhower as leader of the American forces in Europe. However, neither men attended the September parade (even though they were invited). Instead, they sent their representatives: General Brian Robertson represented the British and General George S. Patton stood in for Eisenhower. General Marie-Pierre Kœnig was the leading French officer at the ceremony.

It has been suggested that Eisenhower preferred to holiday in the South of France, whilst Montgomery merely declined to attend. To the Russians, this was a sign of disrespect but neither of their two stand-ins were light-weights.

General Robertson fought in the First World War and was awarded the Military Cross. In World War Two he served in East and North Africa and finally in Italy. Montgomery thought of him as the best chief of administration in the British Army and at the time of this parade, he was the Deputy Military Governor of the British Occupation Zone of Germany. General Patton also fought in the First World War and remained in the army between the wars. During the Second World War, he led US troops in North Africa, Sicily and finally took the Third Army through Europe from Normandy, across the Rhine at Remagen and up to the Elbe where he was halted by Eisenhower and so prevented from driving through to Berlin.

French General Marie-Pierre Kœnig also fought in the First World War. In July 1940 he joined the Free French army and went to Norway, before moving to fight in North Africa. He participated in the invasion of Normandy then took command of the French Forces of the Interior, unifying various resistance groups. Later that year he was appointed the Governor of Paris, finally taking command of the French forces in Berlin

The Russian 248th Infantry Division was formed at the start of the Great Patriotic War in June 1941 as part of the 24th and later the 49th Army and only survived a few months. It was involved in the defence of Moscow at Vyazma near to Smolensk but encirclement by the opposing German forces resulted in the loss of the whole division included in the overall loss during that campaign of 650,000 men (taken prisoner) and the destruction or capture of over 1200 tanks and 5400 guns. The Division was re-formed in May 1942 and virtually wiped out again that same month in the Battle of Kharkov. It was re-formed again in September 1942 and remained active until the end of the war in May 1945, where it was heavily involved in the Battle for Berlin and directly attacked Adolf Hitler’s Reich Chancellery.

The French 2nd Infantry Division was the Berlin garrison and a composite unit made up of mountain and colonial troops.

The British 131st Infantry Brigade started its war during the Battle of France in 1940 before being evacuated through Dunkirk. Having been reformed in numbers and re-equipped they took up the defence of Southern England before going to fight in North Africa under Field-Marshall Montgomery and his Eighth Army and later became part of the 7th Armoured Division. From Tunis they battled on through Italy and took part in the invasion of Normandy before driving on through North-Western Europe, across the Rhine into Germany. Some of the notable regiments that were part of this Brigade were the 1/5th Queens Royal Regiment, 2nd Devonshire Regiment and 9th Durham Light Infantry.

The U.S. 82nd Airborne Division (also known as the “All Americans”) first taste of combat was during the invasion of Sicily in July 1943 before fighting through Italy as infantry troops. They took part in the invasion of Normandy the night before D-Day and then in September 1944, parachuted into the Netherlands as part of Operation Market Garden and the capture of the bridge at Nijmegen. From there they took part in the Battle of the Bulge in the Ardennes Forest in December 1944. Following the end of the war, the division took up the occupation of the American Zone in Berlin. Some of the notable regiments of the division include the 504th and 505th Parachute Infantry Regiments.

The order of each of the nations in the parade was then changed as the armoured troops followed the infantry. They came from the British 7th Armoured Division, French 1st Armoured Division, U.S. 16th Mechanized Cavalry Group and the Soviet 2nd Guards Tank Army.

The 7th Armoured Division comprised of a convoy of 24 A-34 Comet medium cruiser tanks and 30 Daimler Mk II light reconnaissance armoured vehicles. They had fought throughout North Africa, Italy, Northern France and North-Western Europe, ending their war following the Battle for Hamburg in May 1945. They took over the occupation of Germany until the 1950s as part of the British Army on the Rhine. Some of the regiments that followed them throughout their campaigns including the 8th and 11th Hussars and 1st Royal Tank Regiment.

The French 1st Armoured Division was created in 1943 and was posted to North Africa where they stayed until moving to France in 1944. There they were engaged in the sieges of Toulon, Marseille and the liberation of Provence before reaching the Vosges region of France near to the German border. Fighting on through Alsace, they eventually crossed the Rhine and at the end of the war took up the occupation of the French Zone of Berlin.

The 16th mechanized Cavalry Group only came into the war in March 1945, fighting its way through Northern Europe, crossing the Moselle and Rhine rivers before being assigned an administrative role dealing with displaced persons. During the parade, they drove 16 M8 Greyhound light armoured cars.

The Soviet 2nd Guards Tank Army was formed in 1943 and as part of the Ukrainian and Belorussian Fronts, they countered the German offensive and fought them all the way back into Berlin and remained there after the war ended. They took this opportunity to impress their allies (and soon to be adversaries) present with 52 of their newest IS-3 tanks. It was indeed impressive and would have probably been one of the most effective tanks of the Great Patriotic War had the Russians managed to get it into active service before the end of the fighting.

Compared to the British Victory Parade on July 21st 1945 in Berlin, the joint Allied parade paled in many ways.

Firstly, in July, both the current British Prime Minister Winston Churchill and his subsequent successor, Clement Attlee, along with Montgomery and other British commanders took full part in the event. Also, 10,000 troops along with armour, artillery and transport participated along Charlottenburg Chaussee towards the Brandenburg Gate.

The Allied Victory Parade took place at the same location, close to the site of the last significant battle for Berlin, the Reichstag. Whilst it may have been the most suitable location for a military parade (Adolf Hitler also held his own Victory Parade here in July 1940), it was actually in the British controlled zone of Berlin rather than the Russian zone.

Instead of 40,000 troops, ten from each of the represented nations, the Soviets had placed a limit on the number that could take part. There weren’t even the 10,000 as allocated for the British July parade. In September, the British, American and French were only allowed to parade 1000 troops each, whilst the Russians had 2000 troops partaking.

They also stipulated that only around 100 pieces of armour were allowed in the parade.

Whilst not on the grand scale of the British Victory Parade in July 1945, the Allied Victory Parade should not remain ‘The Forgotten Parade’. As the last joint celebration by the Allied forces it would soon be overshadowed by the low lying conflict of the Cold War – and antagonism between East and West.

For more information about the Allied occupation of Berlin from 1945 – including the Potsdam Conference – and the events that preceded it, consider joining one of our Third Reich Tours or Cold War Tours of the city.