The 1936 Summer Olympics began on an atypical August day. Dark clouds gathered in the sky over Berlin’s Olympic Stadium. Occasional rain harassed the spectators. The doomed Hindenburg airship hovered over the Reichssportfeld, intermittently obscuring the sun and casting a giant shadow across the crowd. For the opening ceremony, three-thousand singers warmed the colossal stone-clad stadium in West Berlin with the sound of the German national anthem, followed by a more sinister rendition of the Horst-Wessel-Song.

Only by chance had the opportunity to hold the Olympics Games fallen into the hands of the Nazi regime, with the decision for the venue made in 1931, two years before Hitler’s seizure of power. Previously scheduled to be held in Germany in 1916, the competition was cancelled due to the outbreak of the First World War.

That year, intended to feature the 11th Olympiad, celebrating the brotherhood of man, would be remembered instead for the names of Verdun, the Somme, Jutland & Fromelle. Twenty years later, in Berlin, the Nazi government would utilise the Olympics as a vehicle for presenting Germany’s recently re-assumed vigour – and the physical prowess of its youth. Not only would this be an exhibition of nations, but of the strength of those nations.

As the regime sought to portray athletic success as a manifestation of political victory – in an imposing arena purposely constructed for this carefully stage-managed spectacle. 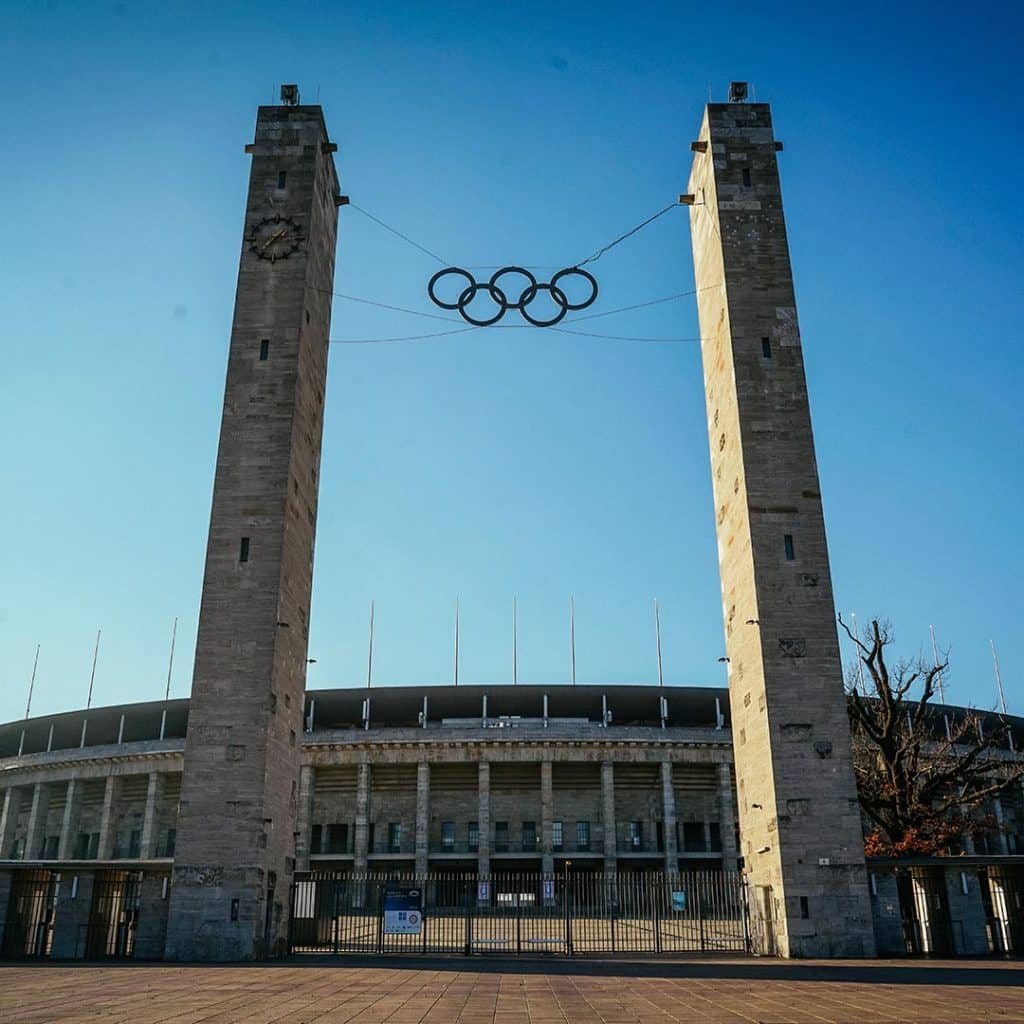 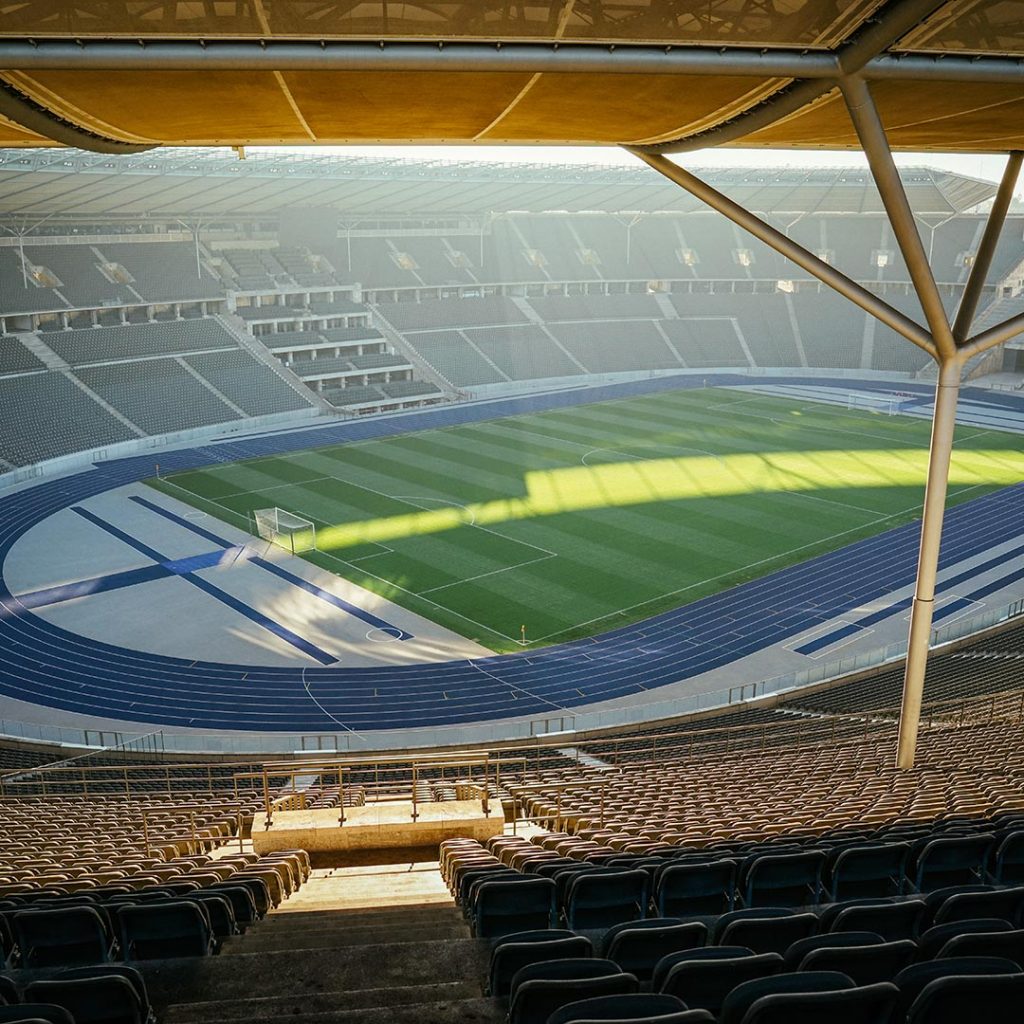 The present day Olympiastadion was designed by Werner March and his brother Walter. Commissioned to replace the Grunewald Race Track & Deutsches Stadion, designed by their father, Otto, with an immense stone temple to the National Socialist Weltanschauung – lowered deep into the sandy soil of this region.

Reminiscent of the stadiums of antiquity, the neo-classicist form of the venue was intended not only to impress but to intimidate with its monstrous dimensions – to contort the spectators into an awe-struck and subservient mass.

The March brother’s work would be closely overseen by Nazi court architect, Albert Speer, ensuring the design’s compliance with Hitler’s personal wishes. While Italian master painter Giotto was known to excel at drawing a perfect circle; it has been said that Speer’s talent could be explained in his ability to draw a straight line – or stick to one.

The Deutsches Stadion and the Deutschen Sportforum (German Sport Forum) would become the Reichssportfeld (Imperial Sport Field) – embracing the nomenclature of Nationalism Socialism and its adoration of the Imperial.

The 1936 Nazi Olympics was the first 100% televised Olympic Games?

Werner March’s original design for the stadium, one of open glass and steel, would be transformed into stone and imposing columns. Lacking in the subtleties and inflections of classical Greek and Roman constructions – opting instead for the brute force of cold, grey, geometric dominance.

A two-tiered arena, with rows of seats on a lower ring – sunk into the ground – and an upper ring towering over the proceedings. Although the stadium is now covered in a immense roof, that seems to float over the the spectators concourse of the arena – interrupted only at the western side by the Marathon Gate – in its original form it was open air and fully exposed to the elements.

The stadium is currently accessible from it east side, with the recognisable two towers of the Olympic Gate (bearing the Olympic Rings but missing the original Swastika previously visible on one of the towers), through a reception building and gift shop.

Next to this entrance is the Podbielski Oak – named after politician Viktor von Podbielski, one of the original planners of the fated 1916 Olympic Games. The oak symbollic as it stands as the German equivalent to the traditional Greek olive tree – in-fact Olympic victors at the 1936 Games would symbolically be offered an oak wreath and seedlings in congratulations. 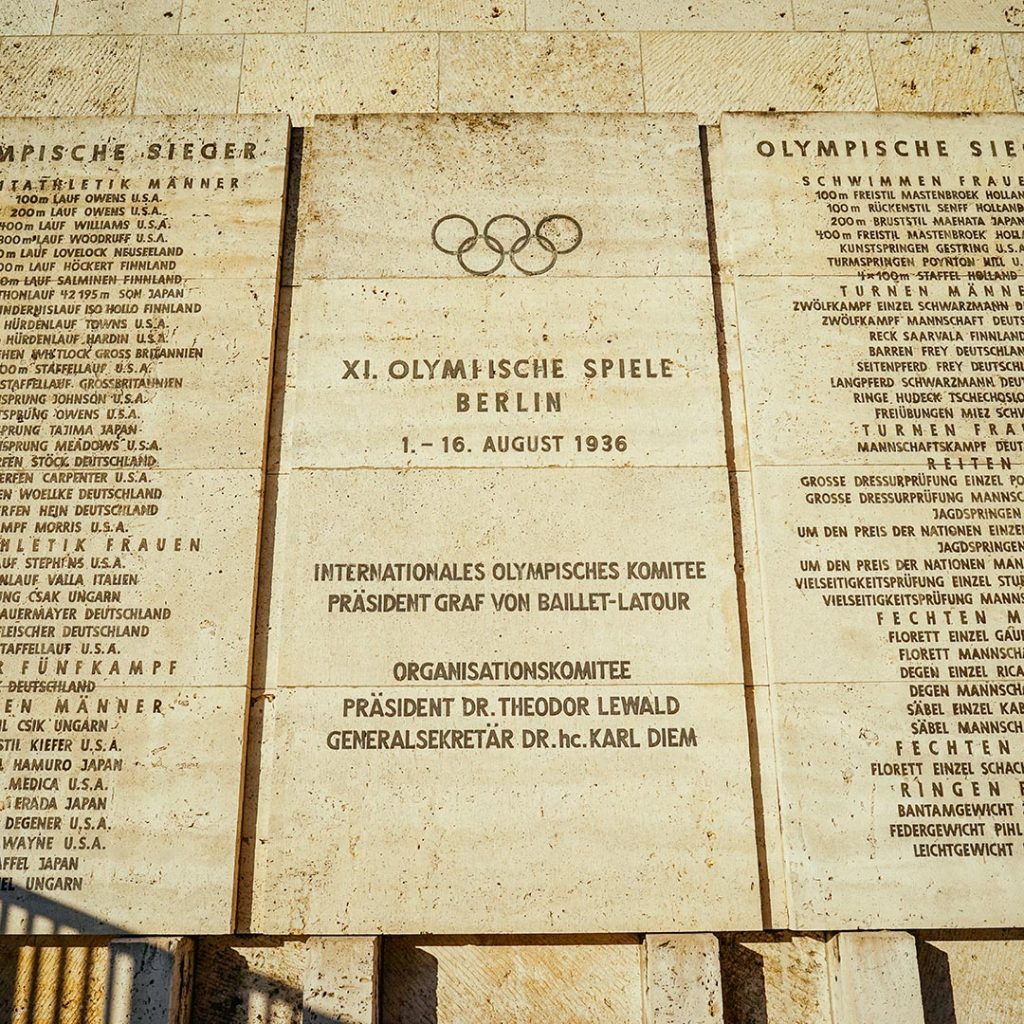 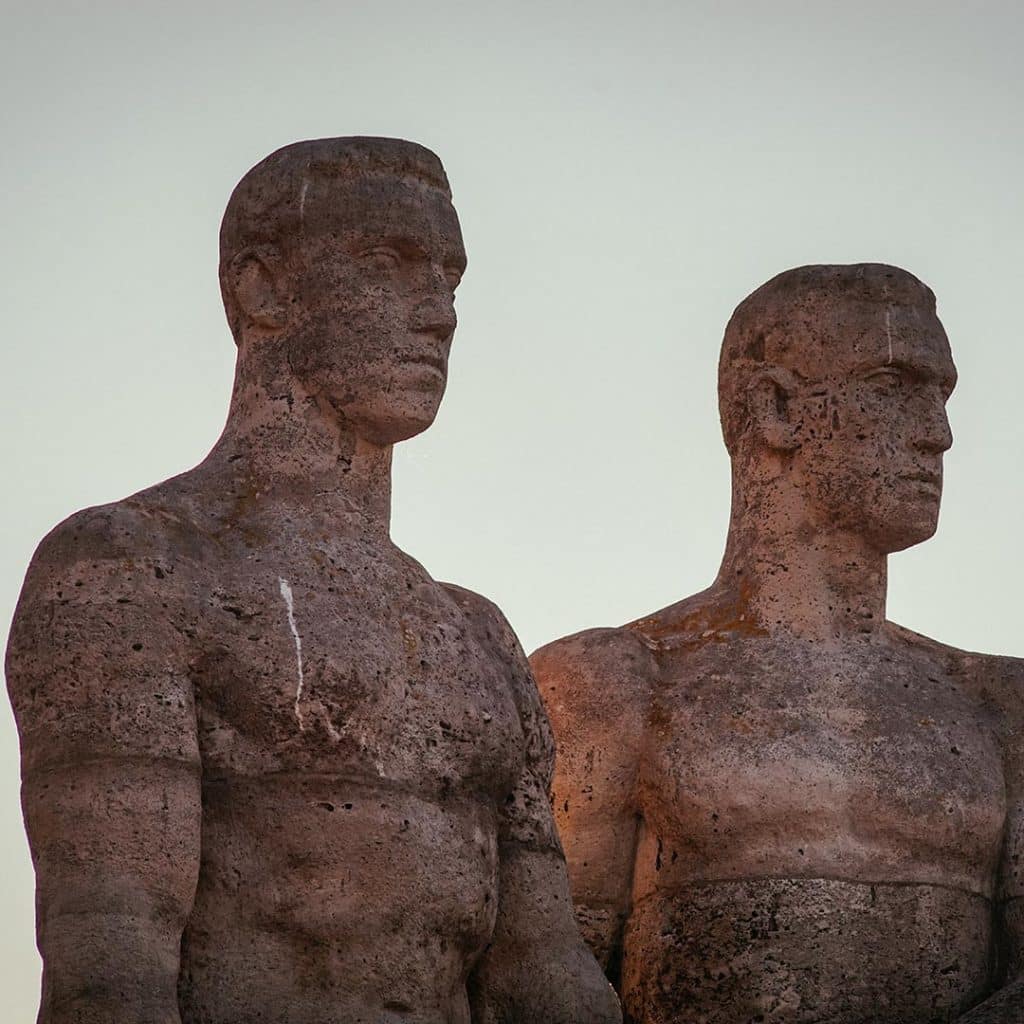 Surrounding the main stadium are numerous figures that remain from the ‘Nazi Olympics’ (the work of well-known artists such as Arno Breker and Waldemar Raemisch) presenting an idealised vision of the human form. To the north side of the stadium is the swimming pool, and grounds that served to accommodate various events (such as field hockey). To the west of the stadium – accessible by either walking around the stadium or exiting through the Marathon Gate – is the Maifeld (Mayfield), constructed to hold more than 300,000 participants and spectators.

This area was designed for gymnastics events – polo and dressage during the Olympics – and later used for Nazi party rallies. With some 20-25 events per year held in the stadium until the outbreak of the Second World War.

Buttressing the Maifeld further to the west is the Langemarck-Halle and 77-metre high Glockenturm. If there was ever any doubt of the symbiosis of sport and war proposed by the National Socialist regime in 1936, it can be shed here. The Langemarck-Halle was constructed in remembrance of 2,000 German soldiers – student volunteers – who fell near Langemarck in Belgium, on November 10th 1914, during the First Battle of Ypres. The heroic myth of self-sacrifice surrounding these deaths sees the young volunteers of the German reserves – inspired by the wave of enthusiastic patriotism that swept across the country at the time – charge at the lines of the French Army and British Expeditionary Force while singing the German national anthem, before being ruthlessly slaughtered.

Despite its renovations and the passage of time, the Olympic Stadium and its grounds still stand as testament to the imperial and totalitarian vision of the National Socialist era.

In particular, the crude simplistic classicism of the venue’s design is one of the most complete examples of an integrated and formalised architectural language of dictatorship in the world.

Some useful links related to the Berlin Olympic Stadium: