The INVENTION OF HELL Tour

Visit the Sachsenhausen Concentration Camp Memorial & Museum and learn about life and death in a Nazi ‘Protective Custody Camp’; the architecture of total control and what inhumanity, humanity is capable of in its darkest moments.

An opportunity to assess Sachsenhausen’s role as the nucleus of the entire Nazi concentration camp industry; a prison to many notable figures; and the site of numerous bizarre developments in Nazi research and military strategy – but also a proving ground for the methods and practices that would lead to the ultimate horror of industrial mass murder and genocide.

…the Tower A entrance & ‘Arbeit Macht Frei’ lettering, the Appelplatz roll call area, the Jewish barracks, the special SS/Gestapo prison, the KGB/NKVD camp, and much more…

Most people, when asked about Nazi camps, would point East – to the extermination camps that gained notoriety through the Holocaust: to Auschwitz, Treblinka, Majdanek etc.

The truth is, however, that these camps came relatively late in the history of the Third Reich. Their predecessors – the concentration camps – such as Sachsenhausen, were constructed within Nazi Germany in the 1930s.

Devised as a so-called ‘protective custody camp’ to house political prisoners, Sachsenhausen grew to become not only the nucleus of the entire Nazi concentration camp industry; but also a proving ground for the methods and practices that would lead to the ultimate horror of industrial mass murder and genocide.

Despite the passage of time, the Tower A entrance to the Sachsenhausen Camp Memorial – emblazoned with its infamous “Arbeit Macht Frei” lettering – still stands as a threshold to another domain.

Missing are the sights, sounds, and smells of casual brutality. Instead of the cramped suffocating architecture of totalitarianism, a vast open field graced with rows of stone markers – where barracks houses once stood – exists in its place.

Constructed by the Nazis, inherited by the Soviet authorities, and transformed into a memorial by the East German government –Sachsenhausen is a startling example of how different regimes chose to use the same land for purposes of punishment and propaganda.

Writer Hannah Arendt referred to the concentration camp as the ‘true central institution of totalitarian organisational power’ – designed for the systematised dehumanisation and destruction of human personality. The ‘theory and practice of hell’ materialised.

A thought-provoking and often uncomfortable journey –the former Nazi concentration camp of Sachsenhausen stands as a warning from the past and a recommended excursion from Berlin to all interested in learning more about the conditions where gratuitous cruelty flourished and experiments to cultivate inhumanity succeeded.

Sachsenhausen now is a place to pay respects, to reflect, and to bear witness. To observe the preservation of memory as a vital tool against the tyranny of forgetting what humanity is capable of in its darkest moments.

HISTORY BEYOND THE MYTH

We will not only examine what remains of the Sachsenhausen camp in its current form as a memorial and museum site but also deal with the important issues associated with this hugely significant location and its tragic history. 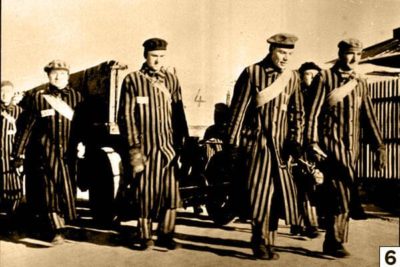 The first step in booking any of our tours is to get in touch – either by email (info@berlinexperiences.com) or by using the contact box below.

What sort of tour/s are you interested in? Have you already booked your accomodation and would like your tour to start there? How many days are you staying in Berlin and would you like to book multiple tours?

Once we have received your initial request we will get back in touch within 24-48hrs with further details and a proposal for your trip.

Bookings for the high season (May-December) need to be paid in full in advance – we accept VISA/Mastercard/Paypal/Bank Transfer and plenty of other forms of payment.