Cross the Boesebruecke at night

Where previously there was a static border there is now movement.

Although relatively peaceful at night, throughout the day this striking bridge serves as a graft on a major artery for traffic flowing through Berlin. Rocking gently as the green steel truss embraces the confluence of passing cars, shaking from the weight of the lemon-coloured trams now routed across this iconic structure – as the station beneath temporarily absorbs the local and regional trains calling into its platforms.

It was here, in 1989, that the first crack in the Berlin Wall appeared – at 11:30pm on November 9th – as thousands of jubilant East German citizens poured across the Bösebrücke, bound for West Berlin.

Before the symbolic destruction of the Berlin Wall began, it was the opening of the inner border crossings, such as this bridge on Bornholmer Strasse, that served as the death knell of the East German socialist regime – and later the entire enterprise of the Soviet Union. 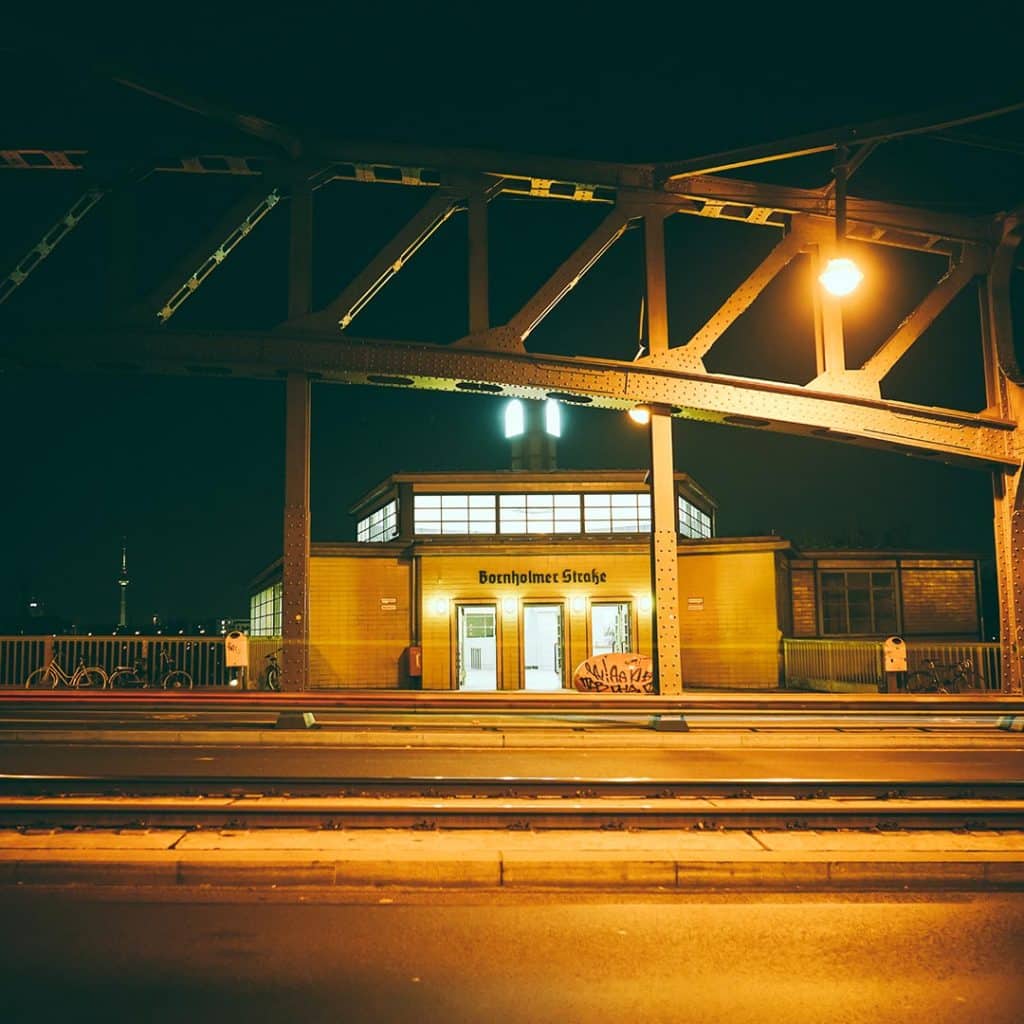 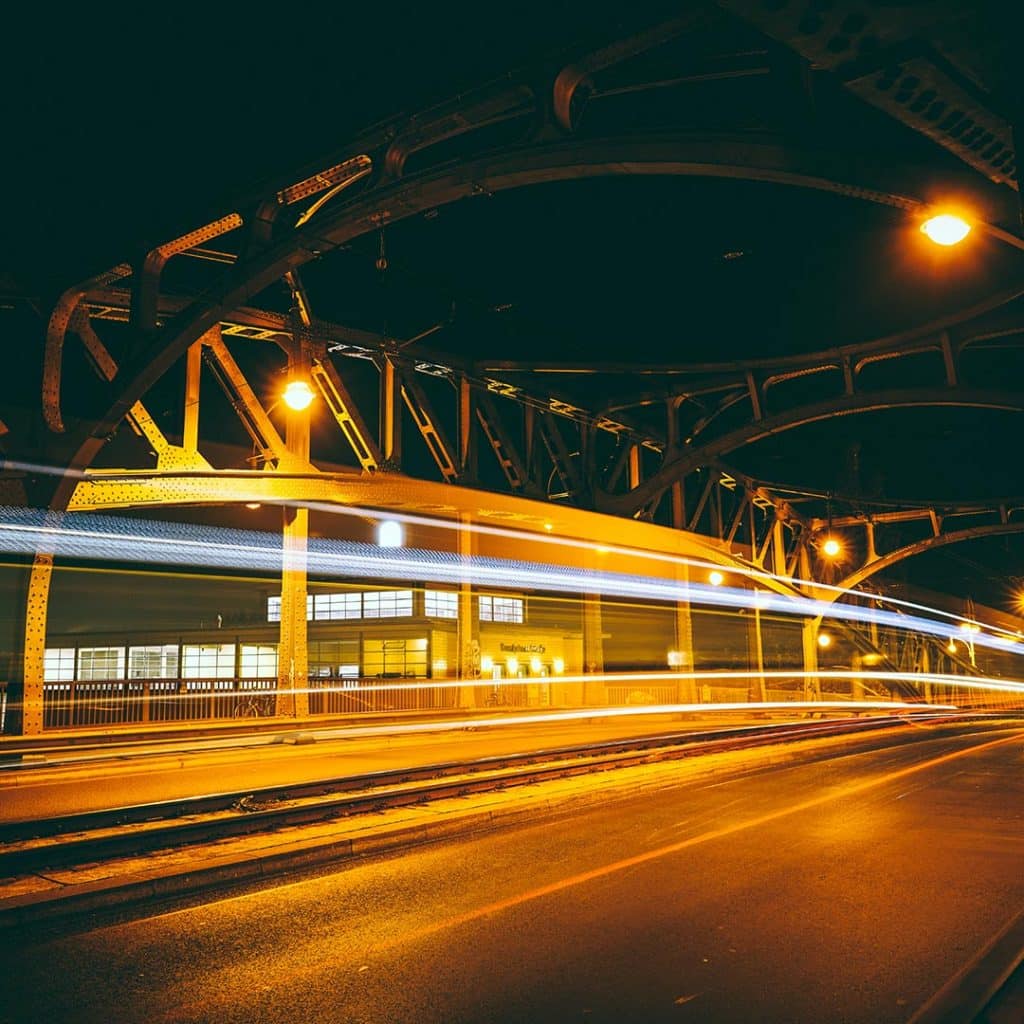 Perhaps as a result of its use as an orientation point by British and US bombers, the bridge survived the Second World War with only minor damage – to be dedicated to Communist Anti-Nazi fighter Wilhelm Böse in 1948. Böse had been executed by the National Socialist regime for his resistance work four years earlier.

Constructed in 1916, it was originally named after celebrated First World War Field Marshal – and future Reich President – Paul von Hindenburg. Hindenburg had risen to fame in 1914 as victor in the Battle of Tannenberg, overseeing the almost complete destruction of the Russian Second Army.

The 66-year-old Field Marshal’s triumph in the East led to his appointment as the Chief of the General Staff of the German Army in 1916. One month later this nickel steel bridge would be named in his honour. Despite the resulting cult of personality frothing around Hindenburg’s name within Germany, it would be the airship (and disaster) that bore his name that his legacy would come to be generally associated with outside the country.

Had the bridge retained its original name (see: Nomen est omen) it would have been more fitting for what it now largely represents – like the Zeppelin disaster in 1937 – the very graphic end of something fatally flawed by design.

The Bösebrücke was mentioned in one of David Bowie’s last successful songs - Where Are We Now - reminiscing about his time in Berlin (“20,000 people cross the Bösebrücke - fingers are crossed, just in case).).

Following the partition of Berlin, in 1945, the eastern side of this bridge would lead to the Soviet occupation sector of divided Berlin – while the western side led to the French occupation sector. Border crossings, such as the one at the Bösebrücke, would be integrated into the Berlin Wall frontier – erected by the East German government in 1961.

With the construction of the Wall – a 160 km concrete lariat that ran around West Berlin as the final part of a ‘Death Strip’ zone of obstacles and observation towers – the East German authorities aimed to completely limit the freedom of movement of East German citizens. The existence of this blood-soaked barrier they considered essential to maintain the integrity and survival of the East German state and its Marxist-Leninist ideology.

In reality this meant that the East German people were, almost without exception, unable to leave the country for the West. Else the brain drain that the country had for the previous 12 years experienced continue; and leave East Germany empty of the people it would make prisoners of in an attempt to prosper. People unable to leave; unable to return; and, in effect, unable to truly make the decision to stay and participate and thus act as true representatives of East German society.

A society watched over by a cadre of secret police enforcers, dedicated to maintaining the status quo – and whose allegiance extended only to the ruling political party and not the people. The borders of this society guarded by uniformed wardens, expected to use all means – including lethal force – to maintain the curtain drawn across society by this deadly frontier. 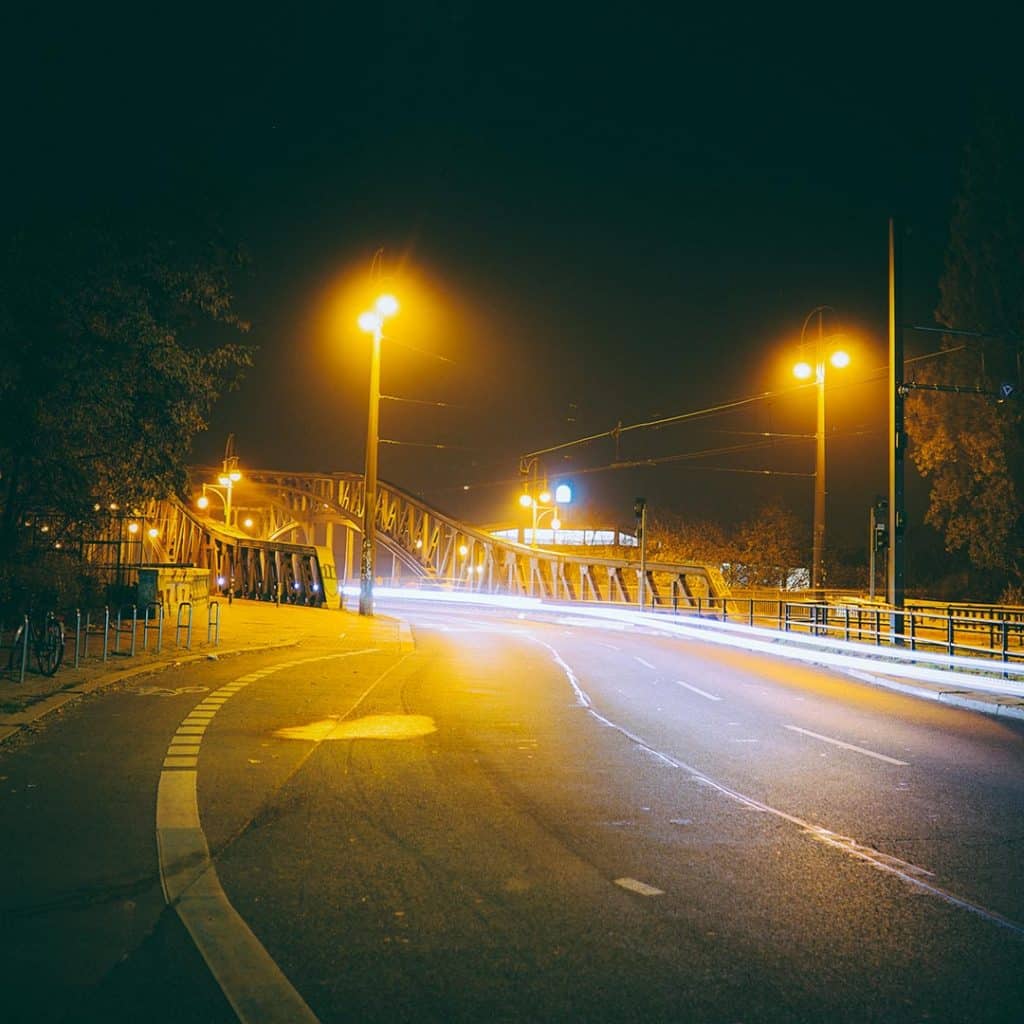 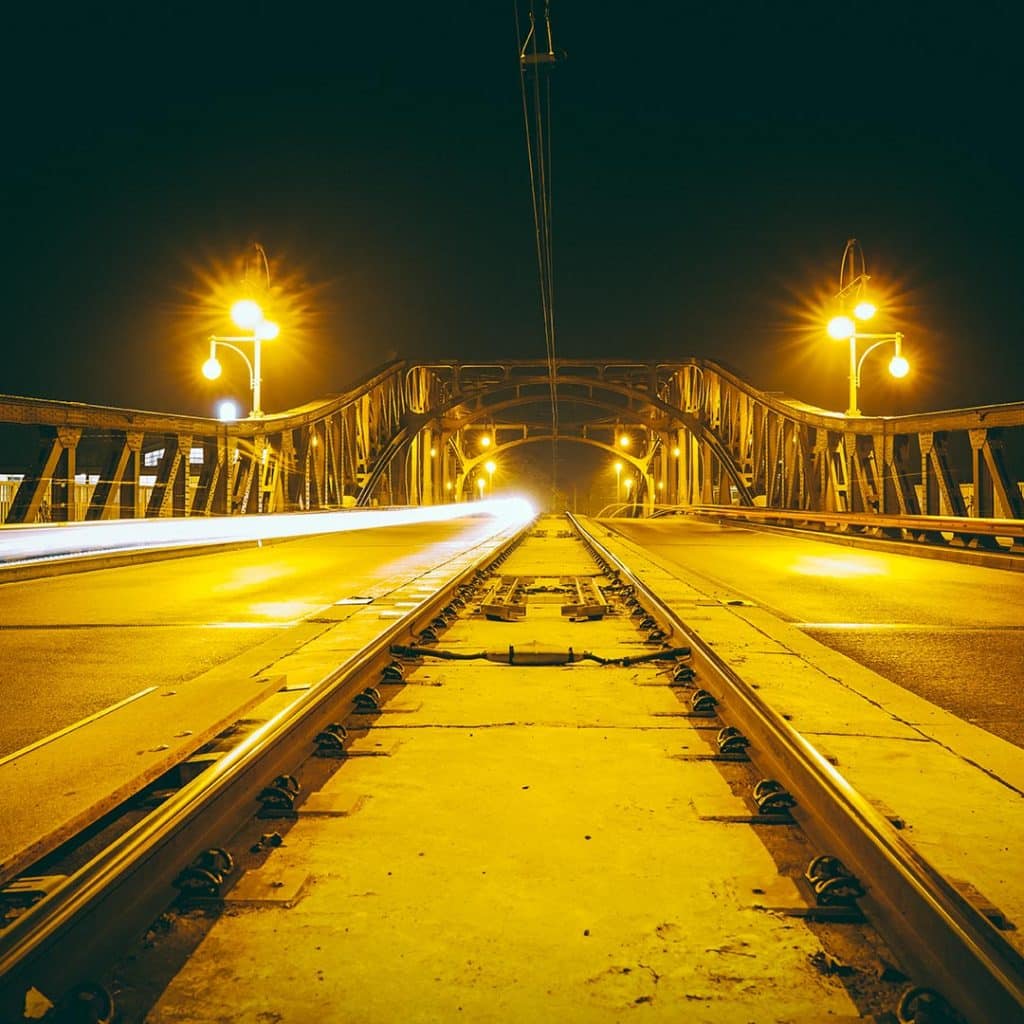 On the evening of  November 9th 1989, some 20,000 East Germans finally walked, ran, and danced across the Bösebrücke into the promise of the capitalist West. Curious about a system that many had only experienced through pirate Western television and radio broadcasts, propaganda such as Der Schwarze Kanal emanating from the East German state, and the occasional West German relative that may have been granted the opportunity to visit.

Faced with an overwhelming number of people, calling on the guards to remove the obstacles to their flight to the West (to the sound of “We only want to see what it is like”), a Stasi officer named Harald Jäger opened the border at 11:30pm.

Crossing the Bösebrücke now – from East to West – is best experienced in the evening, as the structure and train station connected to it – out of use during the Cold War period – sit in a shroud of soft orange from the sodium vapour lights. As the silence of the night – bar the occasional vehicle or sound of the switching tracks and trains – engulfs you.

The border is no more. No guards. No watchmen.

This is what Berlin has finally become: come as you are; go as you please.

Some useful links related to the Bösebrücke:

Visit Cecilienhof - The Site Of The Potsdam Conference

Explore The Allied Museum In Dahlem

Visit The Site Of The German Surrender In 1945 - Karlshorst

Cross The Bösebrücke At Night

Our Related Tours Of Berlin